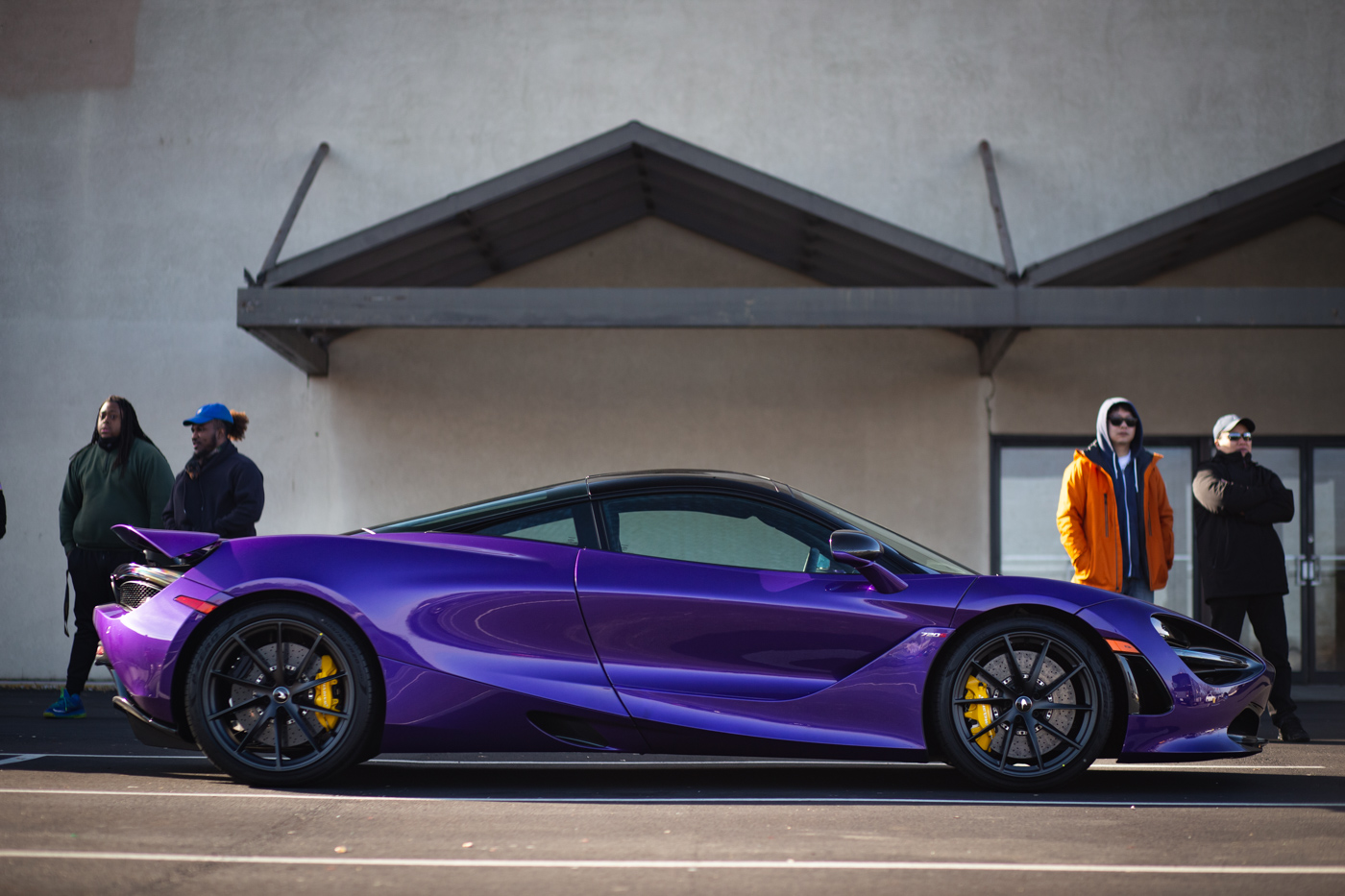 It’s hard to describe why I’m not a huge supercar person. It’s not that I don’t respect them—they will continue to make me turn my head, and I’ll always point them out, but, given the choice between a $100,000 car and a $20,000 car with $80,000 worth of work done to it, I will almost certainly prefer the latter. Maybe I’m too set in my ways, or maybe I’m just plain wrong, but that’s just how Guyon typically operates. Seeing the latest exotic model is always a little special the first time, but I grow bored knowing that there are others like it.

I rolled into Cars and Coffee on Saturday shortly after 8:00 AM. The roof on my Scion FR-S was adorned in frost and the edges of my windshield still revealed my choppy scraping job. I climbed out of my car, camera in hand, intending to greet my friend Matt. But before we had really finished saying “hi”, my eyesight was forcibly interrupted by it.

It was the purple spoiler of a McLaren that poked up just over the trunklid of a neighboring BMW M4. Since I don’t meticulously follow auto news like I did when I was in high school, I ashamedly couldn’t identify which McLaren model I was looking at before close inspection.

Congratulations, McLaren. You got my attention.

I’m a millennial, so I did my part in keeping stereotypes alive by posting a picture of it on my Instagram story. Not too long after this, I received a reply from my close friend Chris Reilly: “your challenge today is to accurately capture this color”. I replied with a confident “You’re on”.

Mauvine Blue is a paint mixed by McLaren Special Operations - a personalization service for McLaren customers. I do not know the exact cost of this paint option, but I know it’s somewhere along what you’d pay for a brand new Honda Fit. When you’re throwing upwards of $300,000 on a car, that’s not too bad, I suppose.

When you walk up to the car in person, it’s overwhelmingly purple. Everyone, myself included, who didn’t know the name of the color beforehand was a little baffled upon hearing it. I had to pull out my phone to double check what I was told.

Long before the McLaren 720S was a thing, and even a bit before the first automobile, the 18 year old William Henry Perkin was on a quest to find a method to treat malaria. While trying to perform quinine total synthesis, he accidentally produced an intense purple dye. To this point, purple dye was harvested from predatory sea snails. If that sounds slow and expensive, you are correct. Developing a method to inexpensively produce purple dye chemically would be a game changer.

Thankfully, Perkin had been dabbling in painting and photography for years, so he was quick to understand the significance of his amazing discovery—the first synthetic dye. He called it mauveine.

You may see why the color’s name, Mauvine Blue (“purpley blue” in layman’s terms), makes sense. These photos represent the color fairly accurately. A search for MSO Mauvine Blue reveals that the blue is sometimes not present at all in photographs. If I get the chance again, I’m going to reattempt to get a closeup of the metal flake. My cheap polarizer was giving me a good fight focusing close up to the paint, so I don’t have any to include.

I am certain that if I see this car again I will be as magnetized to it as I was this go-around, and when I do, I will be determined to capture that sparkle.