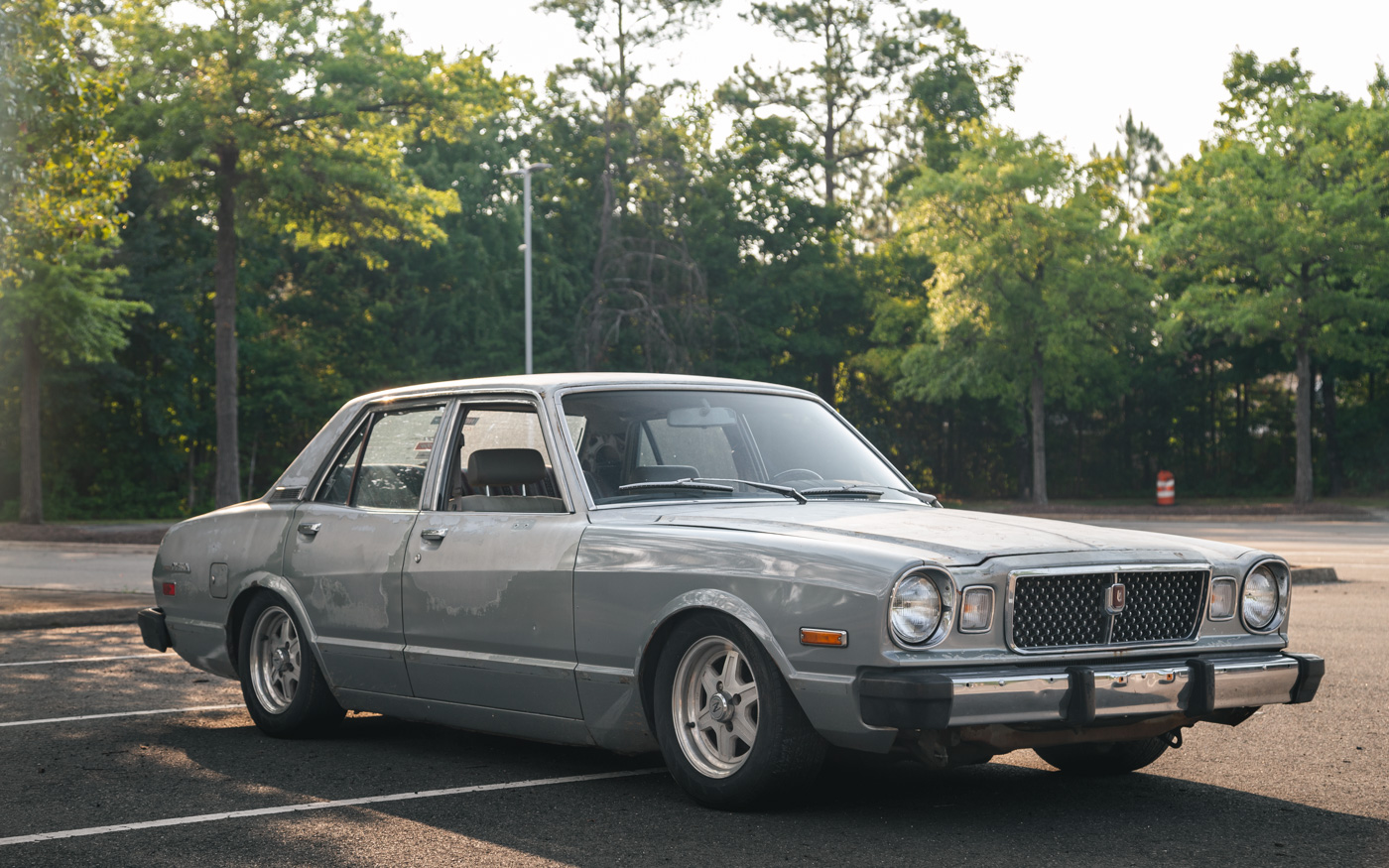 Ever since I was a little kid, I’ve loved the MX32 Cressida. My parents have had one longer than I’ve been alive, and I naturally grew a great attachment to it. It’s never been a particularly good example, and was parked at some point around 2009 and hasn’t moved since. Every time I visit my parents I check it out and its decreasing condition is always a little depressing.

In the more recent years, I came to the conclusion that the better approach would be buying a nicer condition Cressida and starting from there and using my parents’ as a parts car. Ever since, I’ve been keeping tabs on the market using whatever means I can find. At any given point, I could typically turn up one to three MX32s up for grabs in the United States. In more recent searches, I hadn’t been able to find any at all. This made me begin to worry that maybe I missed the boat and I’d never be able to rationally afford my Cressida dreams.

In a moment of weakness, I cold messaged someone in Tennessee that recently picked up a Cressida and asked if he’d be willing to sell it. One thing led to another, and 11 days later my great friend Matt and I headed up towards Knoxville, Tennessee to hopefully pick up a Cressida.

And pick up a Cressida we did!

First impressions on the car - it’s actually a little nicer than the photos led me to believe. Driving it was a little difficult without power steering and having questionable brakes, but I was able to smoothly row through all the gears and the rust situation is better than I anticipated.

I tried to haggle a bit, but the reality is when you travel 425 miles one way and you show up with trailer, the seller knows you’re unlikely to go home empty handed over a couple hundred dollars.

So here it is! It’s home, and so far I’ve had it on the road twice. The first time I took it over to show my guys at JSpec Auto Sports and shoot these photos of it, and the second time to Cars and Coffee Richmond. As fun as it is to drive, it will need some work before I feel it’s ready (read: safe) to be driven frequently.

For my first shoot of the car, I really wanted to capture all the little details exactly as the car was delivered to me. The only difference is the Team Reasonable R sticker on the rear driver’s side window that Andrew snuck on.

A little history on this car - it was apparently owned by an older man in Knoxville, Tennessee for a long time until it was purchased by an individual named Justin, who was a tech at the local Toyota dealership. Almost all of the modification occurred under Justin’s ownership, including a brief period of being powered by Toyota’s 2JZ-GE powerplant. This engine blew up, and the original 2.6L 4M inline six was rebuilt and swapped back in, retaining the 5-speed W58 transmission that went in with the 2JZ.

Early this year, the car was purchased by Justin’s friend Vee, whom I purchased the car from. Vee reportedly didn’t drive the car that much in his ownership.

When going through with the sale, Vee told me that the car had been a bit of a staple of Knoxville car meets, and he knew that if he had to sell it, it would have to be to someone who wasn’t local that he could trust to not ruin the car.

Justin, Vee, I hope I do you well.

So - what are my plans? Many have asked me what my plans are for the car, and answering that has been difficult. My initial goal is to clean up the body some. Rust can destroy these old Toyotas, and if I can quickly tackle that problem I can take my time on everything else.

As far as the vehicle’s purpose goes, I aim for the car to be the best that I can make it. Think Guyon’s non-millionaire take on Singer Vehicle Design, who is known for their meticulously thought out classic Porsche builds. Speaking of which, most of the styling inspiration I have for this car is from Porsches I’ve seen over the years.

This will take a very long time to follow through on, and will ultimately mean the car will go through multiple stages of great transformation.

This was some of my logic for doing such a detailed initial photo shoot of the car. I love learning the history of a vehicle, and I hope to preserve this stage of the car as appropriately as possible.

I don’t plan on pursuing any form of motorsports with this car. It would be fun, but I already have two other cars for that purpose (which, like my other vehicles, I’ve totally failed to document on this website).

At any rate, allow me to get more in depth on the vehicle itself.

The OEM carburetor and associated emissions system has been replaced by the Weber 32-36, which is conveniently the same carburetor I have in my 1978 Toyota Corolla FX. The throttle cable appears to be fed through a braided brake line, presumably to feed it to the throttle lever in a manner that doesn’t put stress on the cable itself.

There’s an electric fan on the radiator that is operated via a mechanical switch on the dashboard that I must remember to turn on if the car is idling in place for an extended period of time. No power steering or AC equipment is to be found here, though I do have it all in boxes included in the sale.

You may have noticed the suspension top hats in the full engine bay shot. I don’t have a full suspension breakdown, but the car is apparently dropped on MaXpeedingRods (what a name!) coilovers that I’ve been told are intended for a Mitsubishi Lancer Evolution.

They ride right harsh, and some light research reveals these can be purchased for as little as $312 for all four. On one hand I think “Wow, these are junk!”, and on the other hand I’m impressed they’re making any profit selling them. At any rate, these are on the short list to get replaced. I don’t have any further information with regards to what else is going on with the suspension, other than that the steering wheel isn’t straight, so I can assume it was never aligned.

Power is put to the ground through some 14x6 wheels borrowed from a Nissan 280ZX wrapped in P205/60R14 Yokohamas which I probably don’t want to know the age of. Thankfully tires this small can be had for mere pennies it seems. I plan to switch these wheels out with something which will probably be another 14” wheel - and definitely no larger.

The interior is better than I expected, but will still need lots of work. This cracked dashboard is pretty bad but somehow still better than the one in the parts car. Overall, I’m pretty content with its state, and the interior is one of the areas I’m most excited to upgrade.

Part of me thinks it would be fun to swap in the gauge cluster from the parts car, as if this car is in some way a continuation of that car’s legacy. The other part of me would love to see a clean implementation of an AiM unit or something similar in its place.

The door cards are dirty and stained but are surprisingly complete - a great starting point.

The real selling point for this car in particular is the W58 transmission swap - it has an awesome shift feel, knob, and stepped rubber boot. I doubt that the 4M engine is in here for the long haul, and the presence of the W58 encourages me to swap in a compatible engine like another 2JZ-GE or a 1UZ. The W58 was naturally mated to the 2JZ-GE in the Lexus SC300 and Toyota Supra. The 1UZ was never natively mated to the W58, but [expensive] aftermarket adaptor plates exist. The clutch pedal feels nice and appears to be an OEM part.

In the back is a pair of VIP trays affixed to the back sides of the front seats. As gnarly as they are, I may end up removing them. It is said that they are from a JDM Toyota Estima (known to us as the Toyota Previa in the states).

While I still don’t have the garage built that I’d like to properly tackle this project in, I am stoked that I finally have an MX32 worth putting some time and money into!

Below you’ll find plenty of extra photos with a plethora of extra little details.

The complete 145 photo album may be found on Flickr here.

As always, thanks for reading ❤.