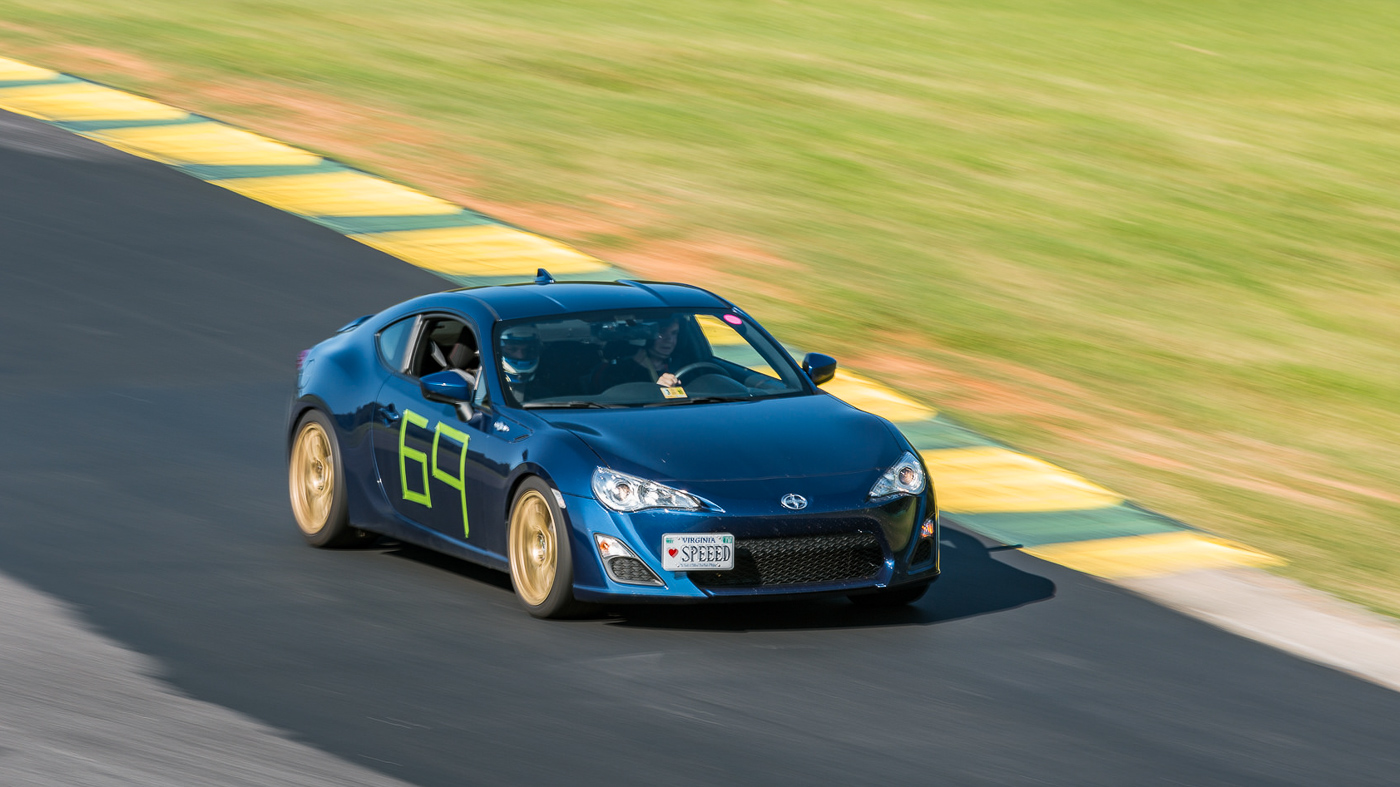 The first two years of FR-S ownership were a blast, but there was so much more to do. One of the original reasons I purchased an FR-S was that I wanted to try some motorsports activities, and autocross had only somewhat scratched that itch. As often as I frequented our local Cars and Coffee, it was only a matter of time before I met a local gearhead that siphoned me into paying for a weekend driving at Virginia International Raceway with NASA Mid-Atlantic.

The experience was incredible. Despite it being my first weekend on track and being on 300TW tires, I was able to turn a 2:25.91 lap time. The fact that my instructor, Ahmed Lufti, was a Time Trials competitor with a highly modified Scion FR-S contributed greatly.

Much of the time on track was spent in traffic. I ended up only needing to give one point-by all weekend, and it was to the 911 behind me in the photo above (who returned the favor). Later, she let me rip her car around the backroads of Alton, Virginia, which just added to how great that weekend was.

After the last session on Sunday, the excitement continued as I drove down to South Carolina on a whim to view the 2017 solar eclipse under the line of totality. I got there around 2:30 AM and since hotels had been booked for months (and I’d be too cheap to pay for one anyway) I ended up camping behind a church in the trunk of my car with the rear seats folded down. This car really does everything. When I woke up I was surprised to find I chose to spend the night next to a graveyard. Up until getting married, this was the best weekend of my life.

In addition to the local track rats, I also befriended other 86 drivers in the Mid-Atlantic 86 club. One Saturday we all met up and did a cruise down the Blue Ridge Parkway.

You may have realized my license plate changed since part one. By 2017, the Don’t Tread On Me plates had earned some connotations I did not want to represent so I eventually settled on my first custom plate - SPEEED - which I still run today.

At the turn of 2018, Andrew and I drove down south to Florida to attend the 24 Hours of Daytona - a multi-class endurance race that continues non-stop for 24 hours. The winning team ended up turning 808 laps in that time frame, logging just under three thousand miles.

We drove the FR-S down, and despite how pleased I was sleeping in the car before, we elected to camp in a tent.

The choice of tent camping was ultimately to our detriment when we found our tent flooded at 8 PM Sunday night (#justFloridaThings). On a whim we decided to head North and see how far we could make it, and aside from a 90 minute nap at a truck stop, I ended up red-eyeing the whole trip home. I would not recommend doing this directly after staying up for 21 hours of a 24 hour race.

Photo quality should improve around this time as this is when I purchased a Canon 6D Mark I and a 24-105mm lens. The 24 Hours of Daytona was an excellent event to break it in (you can view those photos here).

Photography and cars made me some forever friends - two of which are Chris and Matt. At the time, Chris drove this pristine Toyota Celsior imported through Japanese Classics, and Matt drove his beloved and remarkably capable Volvo S60 T6.

Chris (above) has a wealth of photography knowledge and occasionally ropes me into experimenting, hence the infrared long-exposure shot using a filter of his below. Matt developed into a detail wizard and has helped all of us keep our cars clean.

One quality of life upgrade I made during 2018 was this cheap BaysonR front lip. I didn’t want to spend too much money on a part that ends up becoming a consumable due to its low proximity to the ground.

I was right. This one eventually met its fate to some debris on I-195. The second I ruined on some curbing at Summit Point Motorsports Park. The third…well, you’ll see that in Part III.

One of my favorite places to take cars to shoot is this cool alley downtown - mostly because it features an external staircase which you can use to take aerial shots. I later returned to this location to shoot a portion of In Richmond with Roadsters

In this time frame the FR-S made many long trips out to Louisville, Kentucky and everywhere in between to visit Ruby when we were dating. Here she (the car, or Ruby? you decide) is looking great after a slow six mile trek up a rocky logging trail to access a great hike in Duffield, VA - the Devil’s Bathtub.

On one of those long treks, I brought an engagement ring. I proposed to Ruby in front of the Louisville skyline on the Indiana side of the Ohio River. I had my camera set up as if I was shooting the city, but I actually had it prepared to record our engagement. The ring was hidden in a modified 18-55mm lens which she held unknowingly while I awkwardly poured out my heart.

Shortly after returning from the engagement trip, I picked up these 18x9.5 +45 Advan Racing GTs for a killer deal. I fell in love with these wheels after seeing an identical set on the Synergy V8 swapped Jun BRZ and later HKS’s TRB-03, a car developed specifically to break the lap record at Tsubuka in Japan (TRB = Tsukuba Record Breaker). It did just that, lapping the track at 49.445 seconds. There’s some debate over the importance of this record break (former records were set on street tires), but that’s a discussion for another day.

At any rate, these wheels quickly became iconic on the platform.

I had them wrapped in 300 treadwear, 265mm wide Michelin Pilot Sport 4S tires. Here they are, absolutely filthy, on VIR’s skid pad. Around this time I also ditched the front plate and never went back.

Despite loving the gold TWS T66-F’s, I was happy to be committing to a simpler color palette for my daily driver setup.

My T66-F’s became assigned to dedicated track duty and I mounted some 200TW Hankook Ventus RS-4 tires on them. While the Advans are far from being heavy wheels, the T66-F’s are the lightest 18x9.5 wheel I am aware of at a mere 15.6 lbs a corner, so it just made sense to hit the track on these.

After working a few NASA events for driving credit, the FR-S got to turn Summit Point Motorsports Park for the first time in June of 2019. I wasn’t very focused on taking pictures, but did record evidence of me looping it in turn 3 and going off track in the grass - my first off! Thankfully, the only casualty was my front lip as hinted at earlier. I learned a lot about tire pressures that weekend - specifically, don’t have too much of it when going out on track.

A few months later, Ruby and I got married! My groomsmen did a great job carefully decorating the FR-S for our getaway. I had planned on doing a fat burnout, but being ridiculously shaky knee’d after dancing for hours and you know, getting married, I opted to just dump the clutch and send it up the hill. I did not want to end the night stalling it!

Tune in next time for Part III! Thanks for reading! ❤